Rithet’s Bog is an area rich in ecological diversity. It is the last remaining peat bog within the Saanich Peninsula, and as such hosts an array of rare species, of wildlife and plants alike (Golinski 1995, 1997, Green 2006). The region has undergone tremendous change within the last century, and pressures from intensive agricultural use followed by rapid urbanization have impacted the health and structure of the bog ecosystem. From the moment it became a park in 1994, restoration efforts have been directed at preserving the sensitive wetland habitat required by many different species. One of these species is the Vancouver Island Ringlet (Coenonympha tullia insulana), a butterfly that is considered as critically imperiled (red listed) across British Columbia (B.C. Conservation Data Centre, 2013). Although the Rithet population numbers have been stable over the last few years compared to others in the Victoria area (Miskelly, 2007, Hartwell, 2010), their main habitat patch is currently being threatened by reed canary grass (Phalaris arundinacea) and other invasive species. As such, there is a need for a habitat restoration plan to be implemented, followed by a monitoring regime in order to assess the effectiveness of the restoration activities. The following report describe the different steps and methods taken in order to draft the habitat restoration plan. Methods included a systematic butterfly survey conducted every 2 weeks from April to August 2018, Terrestrial Ecosystem Mapping (TEM) of the main habitat area along with the proposed restoration site, and repeat photography in order to assess changes in vegetation and water levels. Over the course of the survey period, 43km of trail were surveyed, spanning over 1000 minutes of observation time. A total of 243 butterflies were observed, from nine different species. Out of those, 82 were Vancouver Island Ringlets. Repeat photography emphasized the dry conditions over the summer period, and the need to have a more permanent water source, while TEM highlighted some of main herbaceous plants and grasses which currently thrive within the butterfly habitat area. Proposed restoration activities for this site include the construction of a butterfly nectar garden, composed of mix of larval host plants and adult nectar species, as well as educational activities and interpretive signage in order to inform the public about this unique habitat. 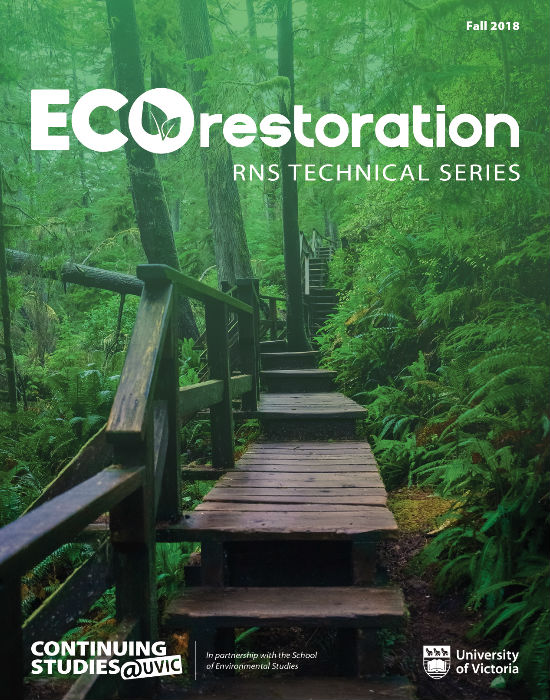